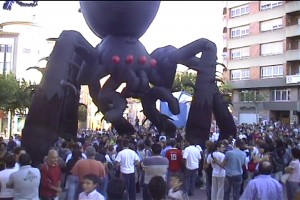 Sid has performed in Beijing and in parades and interventions across Europe from Salamanca to Genk. Possibly the largest and most animated free standing spider puppet in the world he creates much hilarity when he gathers families and dives on them. He is as happy in a long parade as in a small zone intervention and can dive under aerial obstructions. Above you can see him in Tarrega in Spain 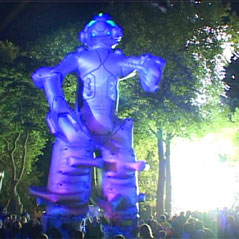 Android Invasions This video shows all our robotic characters in action including possibly the largest Robot in the world who can can make an exciting intervention by himself. So can The Drumming Robots Here you can see them both in action together and separate. These characters can perform long parades in addition to festive interventions. Please see the Drumming Robots for new images of the robots at night. 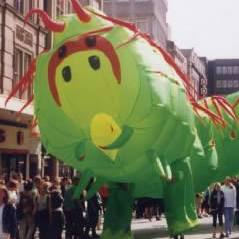 This very hungry Caterpillar eats people. But they seem to like being eaten!   Possibly the largest walkabout puppet in the world - the size of two buses yet very light on its feet- this creature has performed in Taiwan and China and in many places in Europe. Some of the video was unfortunately made on an iPhone held the wrong way...ooops! But it is nice to see the Caterpillar out for a walk with its many friends in Chelmsford. So we kept that footage. The caterpillar enjoys the lack of barriers in an intervention but can also be very interactive in a city parade with barriers here is is a video link of the Caterpillar in the london st patricks parade 2014 Here is a less confined intervention in a busy 14century historic city in Rumania Sibiu festival 2014 Review after the Nice Ca