This very hungry Caterpillar eats people.
But they seem to like being eaten!

Possibly the largest walkabout puppet in the world

- the size of two buses yet very light on its feet-

this creature has performed in Taiwan and China

and in many places in Europe. Some of the video

was unfortunately made on an iPhone held the wrong

way…ooops! But it is nice to see the Caterpillar out

for a walk with its many friends in Chelmsford. So we

letter re st patricks parade london
“Thank you so much for your help in making the 2006 London St. Patrick’s Day Parade
such a great event – it was a wonderful success and I appreciate the time and effort
you put into making it so! The caterpillar was a key centre point
in the parade, wowing all the spectators and getting many comments!
Look forward to working together again”.
- Basra Events 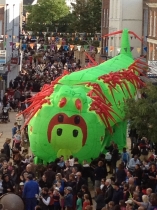