Delireality is a large-scale 40 minute street performance scenographic exploration
of the imagery of Salvador Dali using pyrotechnics, prosthetics,
inflatable sculptures, giant stilts, music and theatre. The scenario
is site and scale adaptable. NWSI have performed Delireality at the
full scale in Singapore, Poznan, Gdansk, Terrasson, Kortrijk, Greenwich,
and Stockton upon tees. smaller versions have been performed in many
other locations.

A parade of samba playing ants leads to a four-metre high burning replica
of the “premonitions of civil war” in paper mache. The ants pass through a curtain
of fire, and into the graveyard of Salvador Dali.

A surrealist sculpture park graveyard is created in a town square. It is the
graveyard of Salvador Dali. This features “pyrotechnic trees”, burnable
sculptures, and many other concrete irrational pyrotechnical furnishings from
the Dalinian iconography. The centrepiece of the graveyard is a 40-square metre
mirrored-box mausoleum.

The funeral cortege of ten giant samba-playing ants and other characters
approaches the graveyard accompanied by the piercing sound of firecrackers and
enters it through the ‘premonitions of civil war’ gate, a full three dimensional
realisation of Dali’s most famous painting. The nine-foot tall ants pay their
respects at Dali’s grave with a surreally-funky display of drumming before
disappearing into the night.

A “criminally-elegant elongated nude” poses whilst Dali sketches her in fire.
He simultaneously dashes off a four-metre pyrotechnic self-portrait.

The super “flare cauldrons” are activated and Dali showers in fire. This is
followed by the dreamy passage through the graveyard of the “Sleep” characters
on stilts and crutches. These are animated elongated heads modelled on the
celebrated Dalinean image of sleep. They are followed by 16-metre tall
illuminated inflatable interpretations of the Dalinean “Angelus” images, and
a pair of enormous inflatable hands, as featured in the painting of Narcissus,
which float through the graveyard to the sound of Bach metamorphosing into
the foot-stamping rhythm of a pure flamenco.

A change of tempo introduces the “Temptations of St. Anthony Parade” featuring
a pair of four-metre elephants, the criminally-elegant blue nude, a green
St. Anthony carrying a pyrotechnic cross, and a host of whirling dervish
one-legged “Dalis” carrying catherine wheels.

An extract from Mahler heralds the entry of an 18-foot steel pyrotechnic
realisation of the celebrated Dalinean image of the burning giraffe. This
pattern consists of 100 small colour-changing Catherine wheels topped with
a spine of fire. This is the emotional climax and celebration follows. With
an eruption of very special giant wheels and other pyrotechnic furnishings
providing the back drop for the whirling dance of one legged “Dalis”
carrying fire-wheels, amongst the tall-as-buildings “Angelus” inflatables,
the “Sleeps”, and the six-metre inflatable hands. This dance is set against
a backdrop of very special effects multiple Catherine wheel installations
(both horizontal and vertical), Roman candle installations

At this point the 10 metre tango couple Dali and Gala dance the tango
and interact with the audience the performance is topped with an aerial
pyrotechnic display. 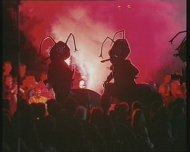 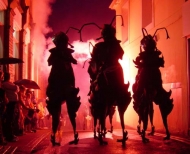 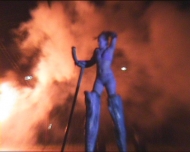 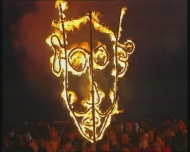 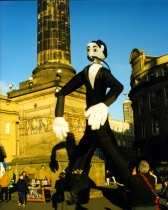 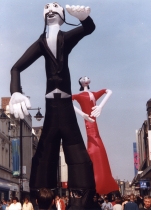 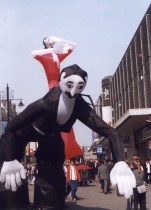 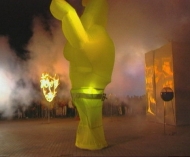 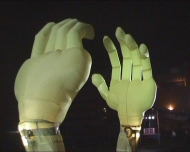 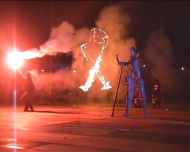 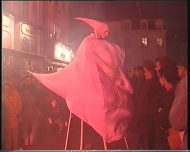 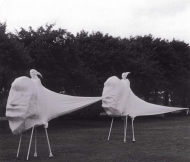 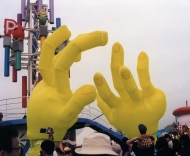